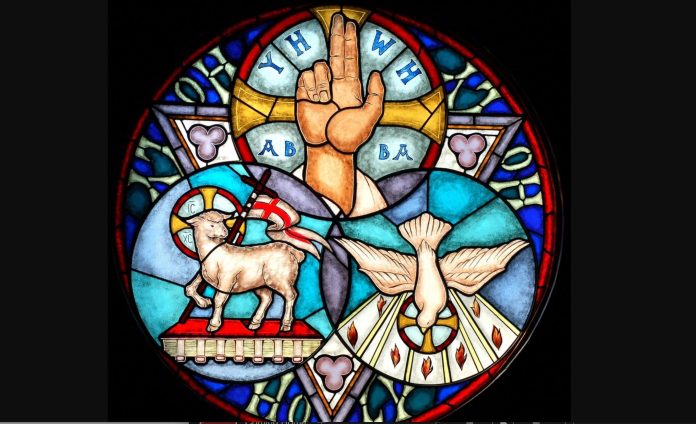 The easiest summary of the doctrine of the Holy Trinity is “three-in-one” (parang kape lang!)

Preachers come up with countless images: two men and a bird; 1+1+1 = 1; one sunlight diffused through a prism; three ice cubes melting into one glass of water.

There are more sophisticated metaphors in the history of theology: father begetting the son, and father-son begetting the Spirit (‘the filioque’ model); love is so perfect that it has turned itself into a person (psycho-emotional model); a mother, a father, a son = one family (social model), etc.

These theoretical attempts at explanation make the Trinity so abstract that it fails to touch real lives. All these actually end up in an “unfathomable mystery” quite far from the experiences of people. The story of the angel’s rebuff of Augustine’s attempt to understand the mystery by the seashore is always a handy story to tell.

The famous theologian, Karl Rahner, sadly commented: “Despite their orthodox confession of the Trinity, Christians are, in their practical life, almost mere ‘monotheists.’ We must be willing to admit that, should the doctrine of the Trinity have to be dropped as false, the major part of religious literature could well remain unchanged.”

True, Christianity has fought the notion of “many gods” (polytheism) for a long time. But a solitary God (monotheism) also has its problems. Difference and plurality need to balance the ambivalence of oneness and unity. “Unity” alone exposes our reading of reality to dangerous slopes.

Throughout history, people have always been duped to believing in “unity.” In the most recent Philippine election, we have seen how “unity” has been abused by the Uniteam — now the winning coalition.

“Unity is a discourse of power, not the desire of the victims. Unity is the voice of impunity, not of justice and integrity… The talk of unity is intended to make us feel safe when we are not, to make us dream of an abstract future without confronting the crimes of the past, to keep us from ‘calling out’ on violent power that wreaks havoc on our land and our people…”

It is an ideology to numb the pain, a smokescreen to hide the crime. The 16th century Anglican bible commentator, John Trapp, wrote: “Unity without truth is no better than conspiracy.”

Now, even before taking the seat of power, this Unity Team starts “canceling people”, dispersing protest groups, telling people to migrate, arrested 90 farmers in Tarlac for illegal assembly (Is this Martial Law again?).

The winners do not know magnanimity in victory. They loath, they humiliate, they gaslight! The trolls are back to spreading lies as they used to do. For all their problems with “cancel culture,” tuloy pa rin ang bardagulan! Ironically, their followers have not really moved on. Worse, the other night the police are back in the slums of Payatas. The children are crying in fear again.

The “tail of the unity snake” is already appearing everywhere even before its head has assumed power.

But the Uniteam is not original in this.

We can call to mind some famous “calls to unity.” And we are not necessarily in good company. Unity and oneness is a discourse of authority, of the victor, of the dictator, of authority that absorbs its subjects unto itself.

“The National Government will therefore regard it as its first and supreme task to restore to the German people unity of mind and will.” (Adolf Hitler, February 1, 1933 – First Radio Address)

“Fascism should more appropriately be called Corporatism because it is a merger of state and corporate power” towards the “unity of the nation” (Benito Mussolini, 1938 upon dissolving the Parliament and creating the Chamber of Fascist Corporations)

“We heal as one” (Duterte’s “Bayanihan to Heal as One Act” – COVID-19 program tagline which we know did not help in the healing but in the stealing.) And where are the perpetrators? They are absolved by the Uniteam of plundering senators!

How does the Christian tradition avoid the danger of instrumentalizing “unity”?

Maybe the Feast of the Trinity can help us.

God is one, God is plural. God is sovereign but God is also equal relations. God is essentially relationship from the start, or from eternity.

Plurality, difference and equality present themselves as antidote to solitary power. Godself as relations tames the sovereignty and omnipotence with which God has been presented in history.

But such equality in difference or plurality in oneness does not exist for itself.

A famous theologian, Catherine La Cugna describes the Trinity as “God for Us” (1991 book of the same title).

Pope Francis expresses it well: “The mystery of the Most Holy Trinity tells us that we do not have a solitary God up there in heaven, far away; no, He is the Father who gave us his Son, who became man like us, and who sends his own Spirit to be even closer to us.” (Pope Francis, 16 June 2019).

The oft-quoted Gospel verse used for Trinity Sunday aptly expresses this: “God so loved the world that he gave his only Son…” (John 3: 16).

The Trinity is not only the nature of God. It is also a challenge how to also live our human lives in its utmost authenticity. The God-in-Relations dares us to live relational lives. The God-for-us dares us to be women and men for others.

I would like to quote part of La Cugna’s conclusion in that book:

“Living trinitarian faith means living as Jesus Christ lived, in persona Christi: preaching the gospel; relying totally on God; offering healing and reconciliation; rejecting laws, customs, conventions that place persons beneath rules; resisting temptation; praying constantly; eating with modern-day lepers and other outcasts; embracing the enemy and the sinner; dying for the sake of the gospel if it is God’s will.

“Living trinitarian faith means living according to the power and presence of the Holy Spirit: training the eyes of the heart on God’s face and name proclaimed before us in the economy; responding to God in faith, hope and love; eventually becoming unrestrictedly united with God.

“Living trinitarian faith means living together in harmony and communion with every other creature in the common household of God, ‘doing all things to the praise and glory of God.’

Here is a God who exists not for oneself but for another, for us, for all.

Happy Trinity Sunday to all!

Father Daniel Franklin Pilario, C.M., is a theologian, professor, and pastor of an urban poor community in the outskirts of the Philippine capital. He is also Vincentian Chair for Social Justice at St. John’s University in New York. The opinions and views expressed in this article are those of the authors. They do not purport to reflect the opinions or views of LiCAS News or its publishers.

Building the future with migrants and refugees

Building the future with migrants and refugees

Climate activist calls on Marcos to ‘lead by example’