The song that brings back nightmares

With the song, you can imagine the Metrocom combing through your communities and sending people to hiding 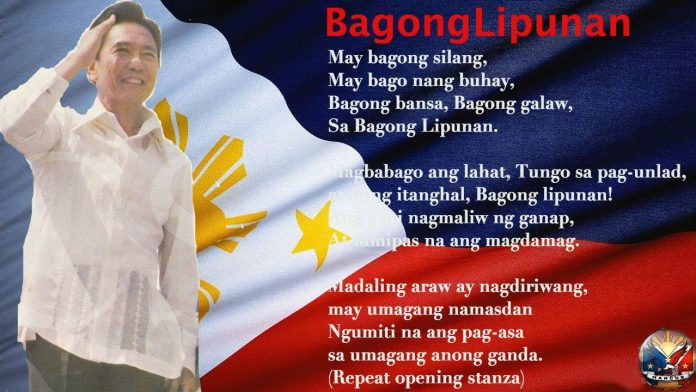 If you have watched one of the UniTeam rallies on YouTube or joined it yourself, you will hear a song that stirs everyone into frenzy — “Martsa ng Bagong Lipunan (Bagong Lipunan March).”

The lyrics are familiar to those of us who lived through Martial Law. With the song, you can imagine the Metrocom combing through your communities and sending people to hiding, for those of us who can still remember. The original version is here.

Through my elementary and high school years, we have to sing it in front of flag poles each morning. As a young boy, I did not understand much then. But when I began reading on the atrocities of Martial Law, the song brings back bad memories of people who disappeared, of people apprehended without reason, of the hushed voices and blank stares, of churches being ransacked and lay leaders “salvaged” (that was the word used then), of Father Rudy Romano, my Redemptorist vocation director who just disappeared, of Ninoy Aquino being killed on the tarmac one Sunday afternoon, of widows weeping and waiting for their sons who did not come back, of people apprehended for months because they violated the curfew, and many more too long for us to enumerate here.

It is a song that brings back real nightmares for many until today. I am not alone.

One author writes: “Forty years after, I still remember those lyrics. And I remember other things as well, like how blue the Metrocom police cars were — somewhere between aqua and turquoise, was it? — and how scared people were when they passed by with sirens blaring. The peanut and komiks vendors right outside my mom’s old wine store would scamper about and hide until the Metrocom were gone, then they would go back to their posts on the sidewalk and offer their wares to busy passers-by.”

And with neither shame nor remorse, the UniTeam intends to bring these nightmares back. The BBM-DDS supporters shamelessly desecrate the memory of the murdered by singing the same song in fun and frenzy — like the famous video of the Marcos children singing “We are the World” during a lavish party at the presidential yacht while millions of Filipino children go hungry, not to mention those in Africa.

Recently, I was a co-speaker in a forum with the distinguished son of the composer, Prof. Felipe de Leon, Jr., the National Commission for Culture and the Arts chairperson. He spontaneously commented: “The Marcos team did not even ask permission from the family to use the composition of my father.” I thought to myself — a Marcos government is one of brazen entitlement to power. As Imelda in the Kingmaker: “We practically own everything in the Philippines.” The father and son is no different at all.

This led me to read more about the origins of the song. The lyrics were done by the famous Levi Celerio and the music by the National Artist Felipe Padilla de Leon.

According to the eldest son, two days after the declaration of Martial Law, “at 2 a.m. two military trucks came to their house asking for a ‘Hymn and a March for the New Society’ as requested by the First Lady Imelda Marcos” to be delivered by Sunday. Felipe asked his son for help, with the father focusing on the hymn and the son working on the first 16-bars of the March. After the Hymn was finished he completed the rest of the March his son has started.”

The song was obviously commissioned by Marcos to extol the “blessings of Martial Law” and give legitimacy to the regime. How can one say No to the dictator who demands a song in the middle of the night under the pressure of military cars?

But despite this, De Leon says his father creatively “put subversive elements to ‘Bagong Pagsilang,’ just like he did on his 1942 ‘Awit sa Paglikha ng Bagong Pilipinas.’ The composer secretly quoted a portion of the protest song Bayan Ko in a part of the song.” Of course, without Marcos knowing it. Or else.

But like the composers of the song, people’s consciences have a way of getting back — not head on but obliquely. For how can you ever explain the endless creativity of the Pink Revolution today. The society is rising up in protest.

Deep in our hearts, we know what is right and what is wrong. Simple folks, ordinary people — without the props of power — continuously “hold the moral line” throughout history.

Father Daniel Franklin Pilario, C.M., is a theologian, professor, and pastor of an urban poor community in the outskirts of the Philippine capital. He is also Vincentian Chair for Social Justice at St. John’s University in New York.

Like a row of dominoes: an analysis of the latest Vatican appointments