"How can you own that which will outlive you? Only the race owns the land because the race lives forever” - Macliing Dulag 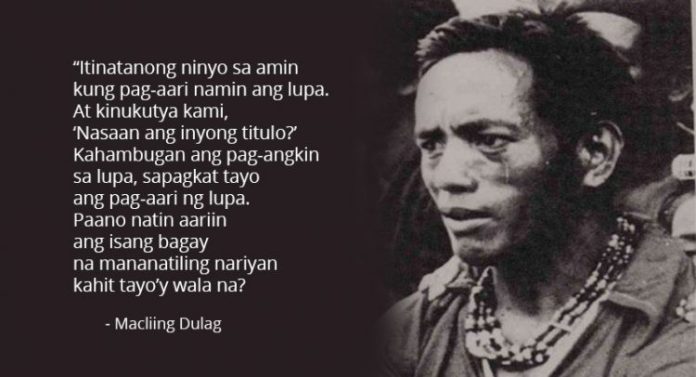 Life under the dictatorship was deadly, especially for those who stood against former President Ferdinand Marcos.

“They deserve to die.” “They are activists and the noisy ones.” “The Philippines is peaceful without them.” These are some of the comments on social media when one speaks about human rights abuses under Martial Law.

Forty-two years ago, the opposition of tribal leader Macliing Dulag to a controversial dam project led to his death on April 24, 1980.

Macliing was a pangat (leader) of the Butbut tribe of Kalinga who opposed the government plan to construct a dam covering the Chico River.

Despite the lack of formal education, Macli-ing knew that the project would eventually displace thousands of his people from their ancestral lands and destroy millions worth of fruits, vegetables, and grains.

Macli-ing was killed on April 24, 1980, by government forces in an attempt to silence him, but his murder was a catalyst that united the peoples of the Cordillera region in opposing the dam. His death anniversary is commemorated through the annual Cordillera Day observance.

One of his famous quotes on the people’s reverence for the land, affirming their right to stay states: “You ask if we own the land and mock us saying, ‘Where is your title?’ When we ask the meaning of your words, you answer with taunting arrogance, ‘Where are the documents to prove that you own the land?’ Titles? Documents? Proof of ownership. Such arrogance to speak of owning the land when we instead are owned by it. How can you own that which will outlive you? Only the race owns the land because the race lives forever.”

My former UP Law professor, now Supreme Court Associate Justice Marvic Leonon, cited Macliing’s words in his concurring opinion in Sama vs People (G.R. No. 224469, January 05, 2021) that Iraya-Mangyans should be acquitted of the crime charged for violating the Revised Forestry Code after they cut down a dita tree without a license or permit issued by the proper authority.

“The indigenous peoples’ struggle for their rights have long been enduring. Their struggle for the recognition of their rights to land and self- determination is rooted in their effort for cultural and human survival. We should honor the struggle of our people. This decision is the least we can do to correct a historical injustice,” wrote Leonen.

Macliing’s death anniversary coincides with the annual celebration of Earth Day every April 22, reminding us of the urgent need to save the environment for present and future generations.

Its inception began following a massive oil spill on January 28, 1969, when an oil well off the coast of Santa Barbara, California, blew out and spewed more than three million gallons of oil, killing more than 10,000 seabirds, dolphins, seals, and sea lions.

During the first Earth Day on April 22, 1970, up to 20 million people hit the streets across cities to protest against the impacts of 150 years of industrial development that left a growing legacy of serious human health impact.

The Philippines is one of most exposed countries in the world to many “natural” hazards, such as earthquakes, volcanic eruptions, tsunami, lahar flows, typhoons, flooding, landslides, and sea level rise.

The country’s vulnerability is aggravated by several forms of environmental degradation, such as deforestation, logging, development and mining projects, causing landslides, floods, and loss in biodiversity, both in maritime and land areas.

In a manifesto, a coalition called EnviRobredo called on candidates in the coming national elections and the public to intensify conversations on environmental defense and climate justice, environmentally destructive projects, biodiversity conservation and just transition to renewable energy.

Members of the science, technology and engineering community also expressed their support for the Robredo-Pangilinan tandem citing their program for the advancement of research and development in the country. It is also a promotion of a pro-people science and technology that serves the interests of our people and that will usher the country into industrial growth and development.

We must remember Macliing’s wisdom on self-determination and the defense of the right to land in our choice of leaders in the coming election.

Whales as symbols of life, death, and hope