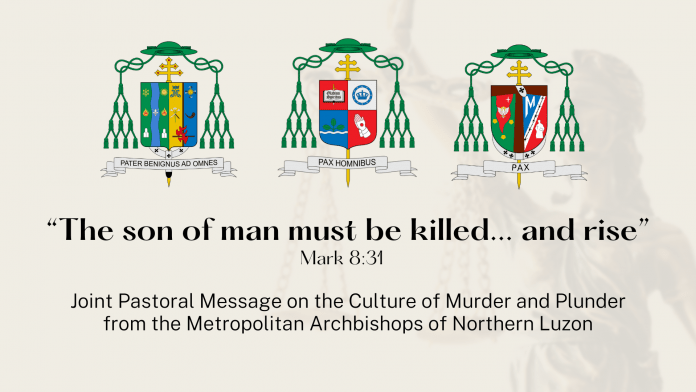 Our dear people of God in Northern Philippines:

The Messiah must be killed and after three days rise again. The Lord predicted His fate and by His death and rising, our sins are forgiven. It was a necessary sacrifice born from His total obedience to the Father. His death is the only death we need. There is no other death needed anymore to improve our situation or to merit God’s mercy. The death of Jesus was the death once and for all.

How may we describe the present social condition of our nation?

It is like living in the valley of death—killing of drug users and opponents; helpless death in the pandemic, death by governance without vision, death by shameless corruption that seems to break all records. Killings! Murders! Deaths!

Since the past five years, more than thirty thousand poor Filipinos have been killed in the campaign against illegal drugs.

Journalists have been killed, political opponents have been murdered, court judges have been assassinated, priests have been shot and critics have been bullied and threatened. The killers are at large and the blind supporters of these murderers applaud the killers.

The pandemic was a calamity of nature that we could not control. We saw death in our homes and offices. The heroic medical health workers risked their safety and some perished with their PPEs on. While other nations have risen from the pandemic, our death toll continues to rise.

Bullets kill. Viruses kill. Governance without direction kills. Corruption kills. Trolls kill with fake news. Hunger kills. When will the killings stop? The poor pay for the corruption of the powerful. The nation is sinking in debt.

Are we facing a dead end and are we helpless? NO. We overcome evil by the power of good. Our help is from the Lord!

This is the time for PENITENCE AND ATONEMENT for our national and personal sins. We can organize penitential rosaries and reparation prayers to the Divine Mercy that the Lord may forgive our murders and our support of murderers. May our penitence lead us to generous and courageous works of mercy and charity in our own personal little ways! “Not all of us can do great things. But we can do small things with great love,” said Mother Teresa.

We citizens must be law abiding but we are not pacifists.

We must RESIST a murderous and corrupt public order guided by the Compendium of the Social Doctrine of the Church #400…admitting that it is legitimate to resist authority should it violate in a serious or repeated manner the essential principles of natural law.

Saint Thomas Aquinas writes that “one is obliged to obey … insofar as it is required by the order of justice“. Natural law is therefore the basis of the right to resistance.

Non-violent resistance, such as peaceful assemblies of dissent or sober discussions of social issues guided by the Gospel or rallies for honesty and heroism, is the path we must choose always (#401). This is the only morally acceptable resistance.

We have a moral duty to resist and correct a culture of murder and plunder as much as the prolonged pattern of hiding or destroying the truth. “As history demonstrates, a democracy without values easily turns into open or thinly disguised totalitarianism” (#407)

In #408 of the same Compendium, we are taught that “In the democratic system, political authority is accountable to the people. Representative bodies must be subjected to effective social control…The obligation on the part of those elected to give an accounting of their work is a constitutive element of democratic representation.”

Guided by this, we commend, bless and encourage the FULL INVESTIGATION, by those in authority, of any whiff of corruption; as we also reproach, rebuke and censure those who obstruct the legal process to arrive at truth and justice. To them we use the rebuke of the Lord “Get behind me, Satan! You do not have in mind the concerns of God, but merely human concerns.” (Mark 8:33).

FREE ELECTIONS which allow the selection and change of representatives is the most effective way to make political authority accountable (cfr. #408). In this spirit, we plead with our youth and first time voters to register themselves. We appeal to the sense of patriotism of the reluctant candidates to bring back ethics in our political life and run according to your conscience not according to the surveys.

May Apo Baket whose birthday we celebrate this week lead us to the TRUTH and the LIFE Jesus the Lord!

From the Metropolitan Cathedrals of the Conversion of Saint Paul, Saint John the Evangelist and Saint Peter, September 12, 2021,
Sincerely yours,