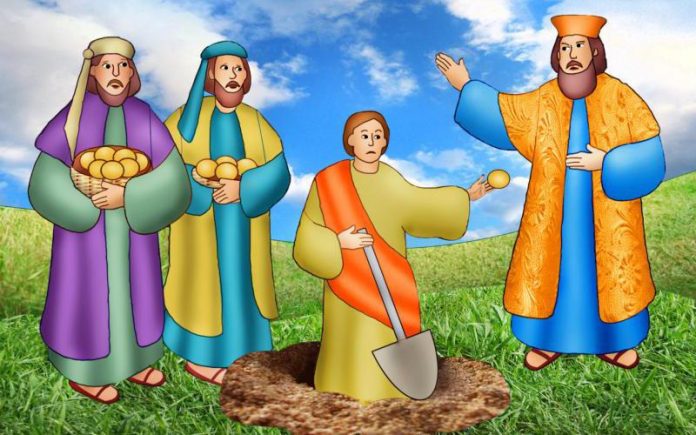 “Because you could be trusted with SMALL THINGS, I will entrust to you greater responsibilities.”

I invite you today to reflect on this important truth: how we deal with “SMALL MATTERS” in our lives speaks a lot about us.

Take note that even the five and two talents given to the first and second servants were also regarded by their Master as “small things” compared to the “greater things” he had in store for all three of them. But first, they had to realize what really was BIG DEAL: the Master’s trust in them.

Remember, he chose these three servants from among many others. And we are told that he gave each one of them “according to his ability.” He wanted to see how they would handle small things before he could entrust bigger things to them.

You see, small responsibilities handled with a lot of dedication and commitment become big deal. It is amazing how some people, when given the chance, can do so much with so little resources. This is particularly true of those who do not look for what is not there but make do with what is there, what is available, and how to make the most of it. The capacity to see great potentials and countless possibilities in small things is a gift; it requires a lot of creativity and imagination.

One of the biggest enemies of potential greatness is the tendency to belittle small things or small people. The third servant belittled what he had received. Why? I suspect that he knew that the others got more and he felt bad about it. Envy can make us small-minded. Look how he belittled not only what he had but also his capacity to make something out of it.

Why did the master get angry with what the third servant did? He did not lose the money; he kept it and returned it. What’s wrong with that? Well, that’s precisely what the master was disappointed about. He entrusted the money, not for him to keep it but for him to use, according to his ability. The master was more interested, not in the profit but in seeing his servant develop his ability to manage resources. It was the reason he had been chosen from among many, in the first place.

Listen to the punishment that he got from the master: “Take the talent from him and give it to the one with ten. For to everyone who has, more will be given and he will grow rich; but from the one who has not, even what he has will be taken away.”

Wait a minute. Listen to that last line: “The one who has not, even what he has will be taken away.” Doesn’t it sound self-contradictory? What would he take away from him if he did not have anything? Well, that’s the point. It was not true, after all, that he did not have anything. He had something but he had belittled it. He had treated it as nothing because he considered it as nothing. And so he ended up with nothing.

This is a bit like the lesson of the multiplication of the five loaves and two fish. Remember how the disciples also belittled what they had? When Jesus told them to feed the crowd of five thousand people and asked them how much food they had, their reply was, “We have nothing but five loaves and two fish.” They called it nothing because they immediately reckoned that it was not much, that it was not enough. They even said, “What good is that for so many?”

This was precisely the attitude that Jesus had to correct first in his own disciples. The lesson that he wanted them to learn was precisely this, “You will never discover the secret of multiplication if you don’t know how to start with what you have. Don’t you ever regard as nothing what you have just because it does not seem much to you. Why? Because you will end up losing it too. Do not look for what is not there. Begin with what you have, however little it might be.

In the version of the multiplication of the loaves as narrated by St. John, even the type of bread was specified. They were five barley loaves and two fish that came from a little boy; they were a gift of the poor. In Jesus’ time, barley was fed only to animals like horses. And so bread made of barley was called the bread of the poor. But look, Jesus took it and gave it importance. This important lesson in life is really at the heart of the EUCHARIST. If you know how to give value to small or little things, you will also know the secret of multiplying them.

Here are the components of the EUCHARIST: He TOOK: meaning, he did not refuse a gift that was given wholeheartedly. Second, he BLESSED it, meaning, he gave thanks for it. He regarded it is as grace. Third, he BROKE it. Meaning, he multiplied it. Fourthly, he gave it, meaning, he shared it so that it could feed many.

If we have been fed with the Eucharist, we should learn never to belittle the small things and the little ones. In the sight of God, we are all big. Remember what the Lord said to the prophet Isaiah? 43:1-4: “But now, thus says the LORD, who created you, Jacob, and formed you, Israel: Do not be afraid, for I have redeemed you; I have called you by name: you are mine… You are precious in my eyes and honored, and I love you.”

For the Lord, the two copper coins of the poor widow were worth much more than the huge amounts that the rich were donating from their surplus. Why? Because they came from a big heart.

What did God see in the Shepherd boy David? A great king who would shepherd his people. What did God see in Mary? The potential ark of the new covenant. What did Jesus see in Simon who thought of himself as a worthless sinner? A solid rock on which to build his Church. What did Jesus see in Matthew whom people looked down upon as a corrupt tax-collector? A potential evangelist. What did he see in the self-righteous Paul who persecuted Christians? A great apostle to the Gentiles. They were all small and wretched but he chose them nevertheless. It was his love that made them big.

The next time you are tempted to despair or lose heart because of your littleness, remember what the Lord said, “If you have faith even just the size of a mustard seed, you can say to a mulberry tree, ‘be uprooted and planted in the sea’ and it will obey you.” You see, faith isn’t just about your trust in God; it is also about God’s faith in us whom he entrusts with great responsibilities despite our littleness.

Listening with the ear of the heart

On the service of teachers

Bishop calls for ‘house-to-house’ vaccination of elderly, people with comorbidities