On September 15, the Office of the Ombudsman issued a memorandum restricting the public access to the records that are supposedly public 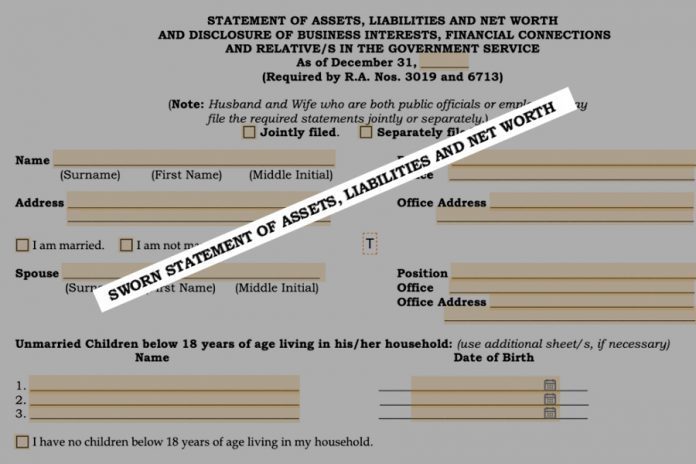 Several Catholic bishops questioned the Philippine government’s decision to restrict public access to the Statements of Assets, Liabilities, and Net Worth (SALN) of government officials.

On September 15, the Office of the Ombudsman issued a memorandum restricting the public, or any organization, access to the records that are supposedly public.

The memorandum said that no SALN will be furnished to the public unless the one who would be requesting for it presents a notarized letter of authority from the government official.

The records will only be given to an authorized representative of the government official, or if the request is upon lawful order of the court in relation to a pending case.

Bishop Broderick Pabillo, Apostolic Administrator of the Archdiocese of Manila, questioned the motive behind the Ombudsman’s decision.

“If they have nothing to hide, why should they not be transparent to the people? The SALN of top government officials are not State secrets to be kept from the public,” said the prelate.

He told LiCAS.news that the move “gives us more reason to doubt this government,” adding that the public must assert its right to information.

Media organizations and other civic groups have been requesting access to the records as part of monitoring, especially if a certain public official is accused of corruption or has a “conflict of interest” in a business transaction.

Bishop Gerardo Alminaza of San Carlos said the decision of the Ombudsman is “highly questionable” and “only makes top government officials look like guilty of not being transparent.”

He said keeping a secret from the public “diminishes and compromises one’s integrity.”

“Obviously, this move raises more questions and doubts. But do they even care about their integrity and credibility? Are they really serious about transparency and accountability?” said the prelate.

Bishop Alminaza urged Filipinos to “raise our voices and complain, question and make them accountable,” adding that the country does not deserve this kind of governance.

The SALN is an important document for transparency and accountability because it details the increase and decrease of a public official’s wealth and discloses business interests.

Bishop Arturo Bastes, retired prelate of Sorsogon, described the memorandum circular of the Ombudsman as a “strange act.”

“It is a sign that government officials are afraid that ordinary citizens and organizations might discover their acts of corruption,” he said.

The prelate said that the order to restrict public access to SALN “casts doubts” because it came in the midst of corruption allegations in the state health insurance system.

It also came as several sectors called for the release of President Rodrigo Duterte’s own SALN.

On the same day that the Office of the Ombudsman issued the memorandum order, the Supreme Court en banc also denied the request of the Office of the Solicitor General to obtain the SALN of Associate Justice Marvic Leonen.

Brian Keith Hosaka, the court’s spokesman, said the justices “unanimously resolved to deny the request” for copies of the SALN and other information about Leonen, a consistent dissenter in the Supreme Court and a critic of the present administration.

The Office of the Solicitor General requested for copies of Leonen’s SALN in preparation for a “quo warranto” petition to unseat the associate justice.

In 2018, former Chief Justice Lourdes Sereno was impeached through a “quo warranto” petition over the non-filing of SALN when she was a professor at the University of the Philippines.

Bishop Ruperto Santos of Balanga said all public officials and public offices must make their records of assets and wealth available to the public for the “proper exercise of check and balance.”

He said public access to SALN of all officials must be practiced in all branches of the government.

“They are all public officials so everything must be made public. To hide or keep something away will never earn trust and suspicions will continue to arise,” said the prelate.

President Duterte has not released his own SALN since 2018, making him the first president to fail to publicly disclose his records since the SALN law was enacted in 1989.

Last year, the Philippine Center for Investigative Journalism made multiple requests for the president’s SALN but they were “tossed back and forth” between government offices.

In its report, the center said all “requests filed in a series from June to November 2019 were denied” because the Ombudsman told them that it “has yet to finalize its new guidelines on the release of the SALNs of the president and other senior officials.”

At least 20 priests from the same diocese who refused to join state-sanctioned Church are under constant pressure, sources say
Read more
News

In this week’s LiCAS.news weekly wrap we report on issues about and of interest to the Catholic Church in Asia
Read more