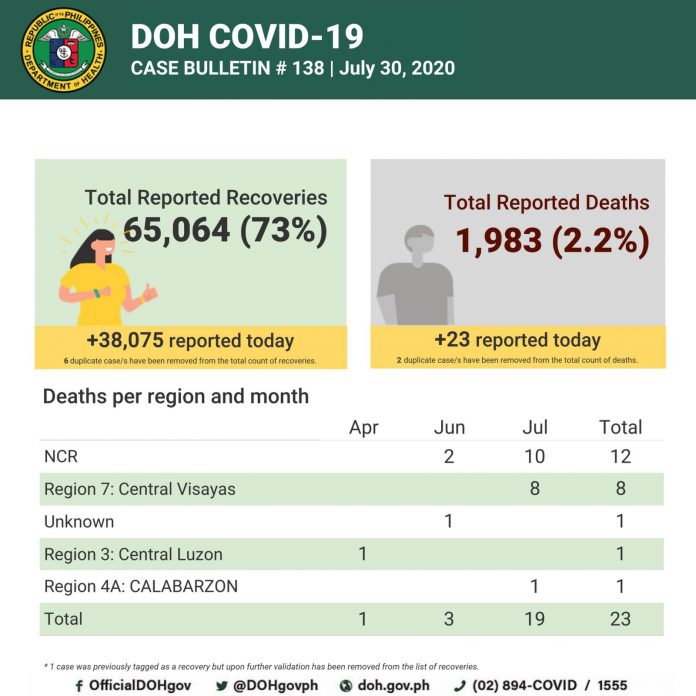 An official of the Episcopal Commission on Health Care demanded an explanation from the Department of Health over the sudden rise in the number of recoveries among COVID-19 patients.

“Let [the Department of Health] explain this,” said Bishop Oscar Florencio, vice chairman of the commission of the Philippine Catholic bishops’ conference.

He said the sudden surge in the number is very “puzzling” but added that “if this is backed up by records and clear honest reporting why should we not believe it?”

“But if this is only meant to impress, then those responsible should be held accountable,” he said.

“This is for me an unbelievable self-contradicting report about the 38,000 recoveries because [on July 30] a record number 4,000 of new cases was announced,” he said.

“It is time for President (Rodrigo) Duterte to fire the incompetent (Francisco) Duque as Secretary of Health,” said the bishop.

“He could be guilty of dishonesty by manipulating the large number of recoveries,” he added.

Various sectors, however, questioned the increase in the recoveries as the previous record high was only about 5,000.

The new cases of infected persons brought the Philippine coronavirus tally close to 90,000.

The Department of Health said these sharp increases in both confirmed cases and recoveries is due to “enhanced data reconciliation efforts” between the national government and local governments.

In early July, the Health department created the COVID-19 Surveillance and Quick Action Unit that validates and reconciles local and national data.

“These massive data reconciliation efforts have resulted in faster and more accurate tagging of health statues — particularly on deaths and recoveries,” said the Health department in a statement.

For recoveries, the department retagged as “recovered” those mild and asymptomatic cases who do not deteriorate 14 days after their symptoms began or their swab samples collected.

On July 15, The government’s data team retagged as recovered certain mild and asymptomatic cases, with endorsement from regional offices, which led to 5,000 recoveries being added to the tally.