“To all who mourn the late archbishop’s passing, the Holy Father imparts his blessing as a pledge of peace and consolation in the Lord” 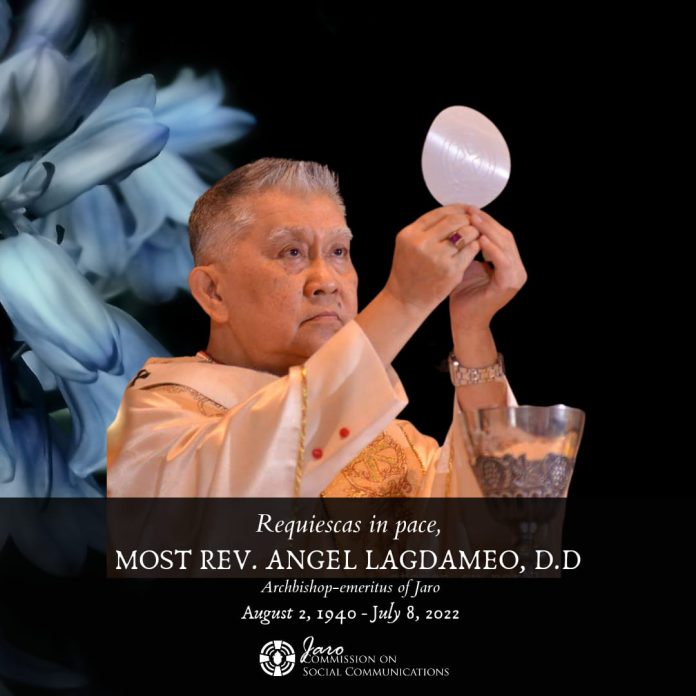 Many gathered at the Jaro Metropolitan Cathedral in the central Philippine province of Iloilo on Tuesday, July 19, to honor a man who lived a life of service.

Those who knew Archbishop Emeritus Angel Lagdameo of Jaro came from near and far to pay their last respects.

Recalling the archbishop’s long years of priestly and episcopal ministry, the papal nuncio said the pope prays that Christ “will grant him the reward of his labors, and welcome his soul into the serenity and joy in heaven.”

“To all who mourn the late archbishop’s passing, the Holy Father imparts his blessing as a pledge of peace and consolation in the Lord,” the nuncio said as he read a letter from Cardinal Pietro Parolin, the Vatican’s secretary of state.

In his homily, Auxiliary Bishop Midyphil Billones of Cebu delivered a touching reflection on the life, the ministry and character of the late archbishop.

“Looking back at his life, he was truly a faithful companion to those entrusted to him by God,” said Billones, who served as Lagdameo’s secretary when he was a priest of Jaro.

The 53-year old bishop highlighted the archbishop’s “divine gift of humor” that characterized his “angelic ministry”.

Humor, according to him, is of “sacred origin” because “it consoles, heals and generates hope”.

“This is the legacy of our beloved angel gifted to us through accompaniment by laughter towards faith, reconciliation, and transformation,” Billones said.

“In accompaniment he made people smile and in that eruption of laughter, the movement of the fire of the spirit triggers transformation for mission,” he added.

Archbishop Lagdameo, a former president of the Catholic Bishops’ Conference of the Philippines, died at the age of 81 in Iloilo City on July 8.

He was Jaro’s archbishop for 17 years until his retirement in 2018.

After the Mass, his cremated remains, contained in a wooden urn, were interred in a mausoleum inside the cathedral.

“May his death give us the needed strength and courage to face the challenges and trials that may come our way,” Archbishop Jose Romeo Lazo of Jaro said.

Britney Spears says she asked for a church wedding: ‘I don’t like being called a liar’

Cardinal Zen of Hong Kong to stand trial in September over...

Shattered dreams amid the Mindanao conflict

Britney Spears says she asked for a church wedding: ‘I don’t...

Cardinal Rosales at 90: ‘Everything is God’s grace’