“We continue to give the Magsaysay Award because greatness of spirit is timeless," said RMAF chairman Aurelio Montinola 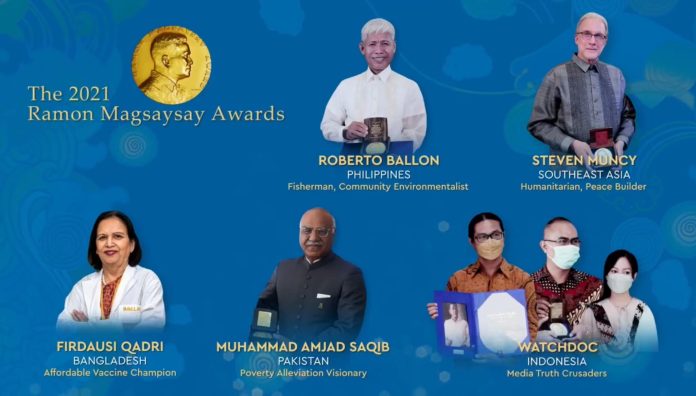 For the first time since its establishment 63 years ago, the annual Ramon Magsaysay Awards, Asia’s Premier Prize, were presented in a simple online ceremony due to the pandemic.

“We at Ramon Magsaysay Award Foundation want to be remembered as the Foundation that soldiered on,” said RMAF president Susan Afan in her opening address.

“We have realities we need to face — sickness, lockdowns, death, and more uncertainty. But we want to do our share by focusing on stories of courage and hope,” she added.

This year’s Awards once again displayed the diversity and inclusiveness of the winners who come from “a wide range of backgrounds, visions, and undertakings.”

The Awards were given to Roberto “Ka Dodoy” Ballon, a fisherman and community environmentalist from the southern Philippines; Steven Muncy, a humanitarian and peace builder working all over Southeast Asia; Muhammad Amjad Saqib, a poverty alleviation visionary from Pakistan; Firdausi Qadri, an affordable vaccine champion from Bangladesh; and WatchDoc, a group of media truth crusaders from Indonesia.

Due to the limitations brought about by the global health crisis, two of the awardees were given the honor in Manila, while the other three got theirs in Islamabad, Dhaka, and Jakarta.

“We continue to give the Magsaysay Award because greatness of spirit is timeless,” said RMAF chairman Aurelio Montinola.

“It is the virtue that is shared by all the laureates,” he said, adding the “greatness of spirit” is “even more relevant today with a global health crisis, social and political conflicts, and widespread negativism overwhelming people everywhere.”

“By celebrating the awardees lifework, we hold them up for their undaunted and untiring labor to overcome formidable challenges; and release their fellowmen from the sufferings that they endure. By their example, we can kindle our hope, and believe that we too can do something,” said Montinola.

In his acceptance response, Ballon said that “no matter how simple we are, we are capable of rising above our weaknesses, capable of choosing what is good, and ever capable of making a new start.”

“May this crusade continue until we can achieve our goal of becoming successful and progressive Filipinos in the entire nation and to the whole of Asia and the world,” he said.

Muncy shared that many have asked what has kept him going in this work for more than 40 years.

“Quite frankly, I believe every person is a holy place. Meaning, there is something of the Divine in each of us,” he said.

“This, my brothers and sisters, is the basis for my firm conviction that we are indeed members of the same family – humanity,” added Muncy.

Philippine Vice President Leonor Robredo, who graced the occasion, said “inclusiveness should not be a matter of charity. It is the very rationale of governance.”

“This revelation can only be put into practice if those who govern truly understand the meaning of solidarity — walking in the slippers of the people not for show but for real, feeling their despair, carrying their burdens as their own,” she said.

“Only then can the structures blurred by patronage be seen with moral clarity — and be reformed, reoriented, or even dismantled to give way to a society animated by radical solidarity,” added Robredo.

“Much like Ka Dodoy’s mangrove forests, we need to start walking into the brackish waters, bending our backs, and planting, seedling by seedling, until the sea itself notices. This is what it takes to build a future,” said the Philippine vice president.

Established in 1958, the Ramon Magsaysay Awards celebrates the memory and leadership example of the seventh Philippine president after whom the award is named, and is given every year to individuals or organizations in Asia who manifest the same selfless service and transformative influence that ruled the life of the late and beloved Filipino leader.

The award-giving body said that this year’s awardees “are one in their commitment to build solutions to vital and complex issues in their societies.”