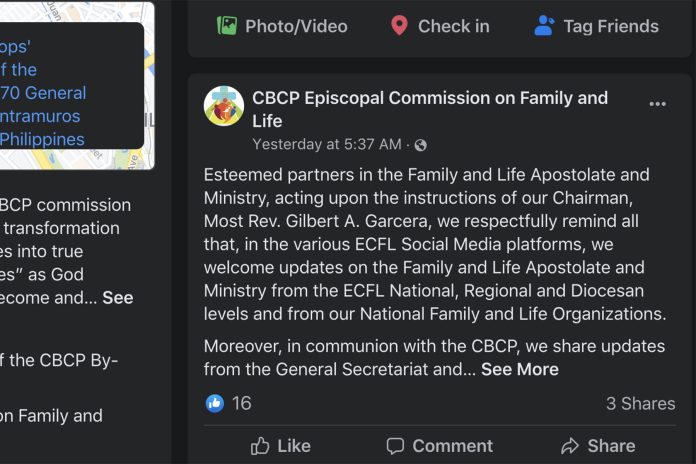 The Episcopal Commission on Family and Life of the Philippine bishops’ conference reminded its members and partners to avoid partisan politics on its social media sites.

“Please refrain from posting materials that can be identified with partisan politics or with endeavors not directly connected with the Family and Life Apostolate,” read the group’s statement on its Facebook page.

The priest, however, said updates from the commission’s national, regional, and diocesan levels are welcomed.

Earlier, Bishop Bishop Marcelino Antonio Maralit, head of the Episcopal Commission on Social Communications, reminded Filipinos to use the internet and social media as instruments for good in next year’s national elections.

“Social media is an instrument that can be used for good or bad. We, the faithful, are not exempt from it if we will not be careful, especially during the election season,” said the prelate.

In an interview over Veritas 846, the bishop said it is important to always check the facts to avoid becoming victims or instruments of “fake news” in various social media platforms.

“So that you will not become victims of fake news, always make it a rule to check facts. Do not immediately believe what you read especially if it comes from unknown sources,” he said.

In his 2019 message for the World Day of Social Communications, Pope Francis called for the responsible use of the internet, saying it should be used to liberate not to entrap.

Advertising firms “We Are Social” and “Hootsuite” have reported that Filipinos spend an average of four hours and 15 minutes each day on social media, topping the global usage rankings.

Political observers said the use of social media is “particularly important” in next year’s elections.

PS-ENGAGE, a consultancy firm, cited how social media platforms, particularly Facebook, catapulted President Rodrigo Duterte to the presidency in 2016 with over 16 million votes.

Bishop Jose Colin Bagaforo, head of the social action commission of the bishops’ conference, has earlier urged Filipinos to reflect on their choices in next year’s elections.

“Whom we vote reflects ones values in life, whoever we vote for is a reflection of our values,” said the prelate.