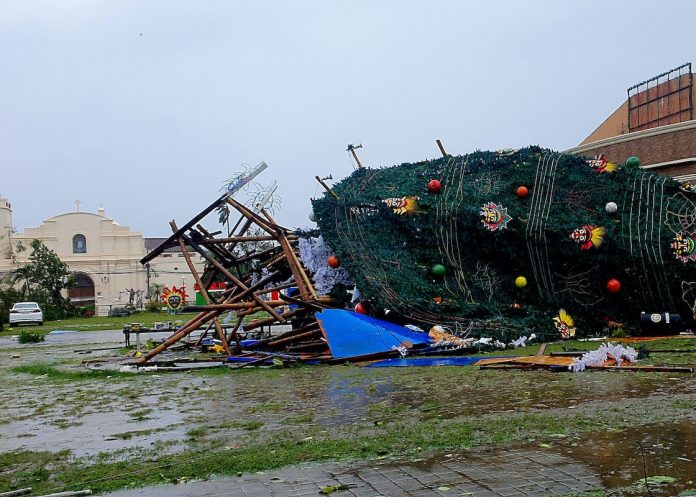 When the clock struck twelve on Christmas eve, Judith Guande, 41, and her children huddled in fear in a small corner inside a classroom in the central Philippines.

They fled their seaside home earlier in the evening just in time to escape the wrath of typhoon Phanfone (locally named “Ursula”), which swept through the region on Dec. 24.

Packing maximum winds of 140 kilometers per hour near and gusts of up to 195 kph, “Ursula” left several towns flooded and houses damaged.

“We have to evacuate because our house is just a few meters away from the sea,” said Judith, a single mom of six who earns less than a dollar a day doing menial jobs for neighbors.

When Christmas morning came, after the typhoon has passed, Judith’s home had no roof, a slight “improvement” from 2013 when super typhoon Haiyan completely destroyed her home.

“It’s the same pain again,” she said with tears in her eyes. “But I have to move on, or else the pain will swallow me alive,” said Judith as she started to gather what little was left of her belongings.

“Ursula” was the strongest typhoon to hit the central Philippines this year, leaving at least 16 people dead and thousands homeless, ruining traditional Christmas celebrations in the predominantly Catholic country.

Although much weaker than Haiyan, “Ursula” tracked a similar path of the 2013 super typhoon, the deadliest storm on record that left more than 7,300 people dead or missing.

The Philippines is the first major landmass facing the Pacific typhoon belt, and is hit by an average of approximately 20 major storms a year.

Christmas away from home

In the southern Philippine city of Surigao, in Mindanao, stranded passengers celebrated Christmas inside vehicles and in shelters around the ports.

Norberto Otordos, 53, was on his way to seek refuge on Dinagat island with his wife and ten-year old grandchild when the typhoon caught them.

The couple and the small child were leaving Mindanao after the magnitude 6.9 earthquake on Dec. 15 destroyed their home.

“We left our destroyed home in the evening of Dec. 22 hoping that we will arrive in Dinagat and celebrate our Christmas in our new home,” said Norberto.

Life in the village they left behind is impossible, he said. “We could barely get a decent sleep because of the aftershocks. We were sleeping in a tent that has always been battered by the rain,” he added.

Marylou, Norbert’s 52-year old wife, said they were left with no choice but to spend Christmas inside the ferry terminal.

For the first time in their 31 years of marriage, it was the couple’s first time to celebrate the birth of Jesus far from home.

Authorities said over 23,000 people were stranded in various sea ports across the country on Christmas eve due to the suspension of sea travel.

Several airports, especially in the province of Aklan, were also closed.

“It uprooted the almost century old mango tree. But no life was lost,” wrote the priest on a social media post.

“We have to take our brooms now to take away the year end’s gloom and hope that 2020 will groom us to gloom,” he added.

Cardinal Luis Antonio Tagle of Manila asked the faithful to pray for those affected by the disaster, especially those in the Visayas and Bicol regions.

“We really cannot schedule when things like this will come,” said the prelate as he appealed for “solidarity.”

Father Chris Arthur Militante of the Archdiocese of Palo, which was badly hit by the 2013 typhoon, said people only sought shelter this time at the height of the typhoon.

He said that “because it’s Christmas many hands were reaching out to their respective neighborhood.”

In an emotional Christmas greeting to affected families, Father Kim Margallo of Tacloban said: “Christmas is not how much you have, but it is about the life that you were gifted with after the storm.”

Erwin Mascarinas and Jun Aguirre contributed to this report.

‘Don’t be ashamed of your humble beginnings,” bishop tells priests

‘Don’t be ashamed of your humble beginnings,” bishop tells priests