Father Gallardo died on May 3, 2000, in a crossfire between the Abu Sayyaf and Philippine government security forces 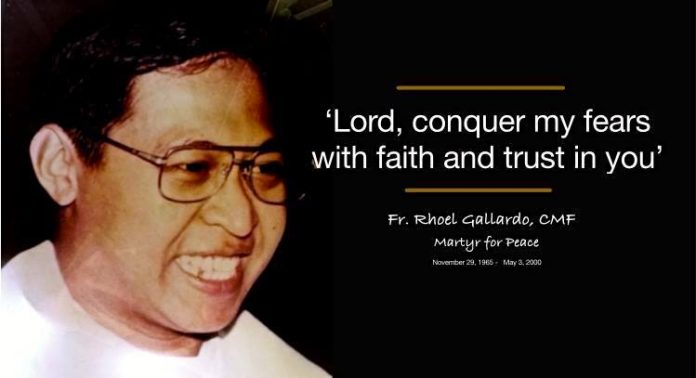 The Prelature of Isabela de Basilan in the southern Philippines will launch on May 3 the cause for the beatification of Claretian missionary priest Rhoel Gallardo, who died while in the hands of a terrorist group in 2000.

Bishop Leo Dalmao of Isabela will formally open the “cause of martyrdom” in the village of Tumahubong in Basilan on Monday, the 21st anniversary of the priest’s death.

Father Gallardo was parish priest and school director in the village during the time of his abduction and death.

In a statement, the Missionary Sons of the Immaculate Heart of Mary, better known as the Claretians, said the village of Tumahubong is “the promised land, the testing ground of arduous hearts for the mission, the love of those who see Jesus amidst religious and political conflicts.”

Father Krzysztof Gierat, CMF, General Postulator for the Causes of Saints of the Claretian congregation, will serve as postulator, with Father Efren Limpo, CMF, as vice postulator.

Father Gallardo died on May 3, 2000, in a crossfire between the Abu Sayyaf bandit group that held the priest hostage and government security forces.

The priest was held in captivity since March 20 that year along with four teachers and several students from the village of Tumahubong.

Father Gallardo’s body was found with several bullet wounds and signs of torture.

Basilan used to be the stronghold of the Abu Sayyaf, a group notorious for kidnapping for ransom and other atrocities.

Reports said the month and a half hostage crisis in 2000 were “days of heroism” for the 33-year-old Claretian priest.

Those who survived the ordeal recalled how Father Gallardo would tell them not to lose hope and to pray the rosary. They

Born in Olongapo City, north of Manila, in 1965, Father Gallardo made his first religious profession in 1989 in the city of Isabela in Basilan and completed his pastoral year in Maluso town, also in Basilan.

In his application for perpetual profession, he wrote: “My pastoral immersion in Basilan last year made me experience concretely our witnessing and evangelizing life and mission to the poor (as well as) our community’s presence in the dialogue of life and faith with our Muslim brothers and sisters.”

“These experiences as a whole have become a real challenge to me to be a committed missionary and active witness to God’s liberating love for humanity… conscious that our life and mission demand a total giving of ourselves for the greater glory of God and the salvation of humankind,” he added.

Father Gallardo made his perpetual profession in 1993 and was ordained to the priesthood at the Immaculate Heart of Mary Parish in Quezon City in 1994.

A few years after his ordination, he volunteered to go to the village of Tumahubong as director of Claret School and as parish priest.