‘The Case for Christ’ 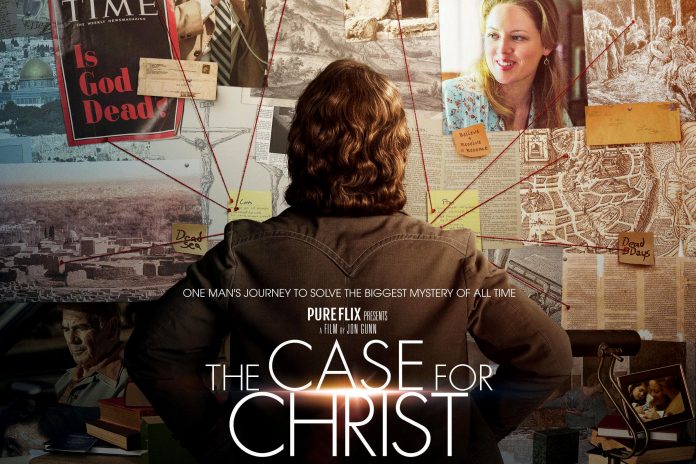 Here’s something to watch this Holy Week.

“The Case for Christ” is the story of journalist Lee Strobel’s journey to faith. He used his investigative reporting skills to disprove that Jesus rose from the dead after his wife became a Christian.

Set in 1980 America, Strobel, an investigative reporter for the Chicago Tribune, did his best to search for “truth,” examining various records and accounts, interviewing specialists, and fact-checking.

All the while his wife’s faith in the Lord grew stronger every day as Strobel struggles with his search for Jesus’ true nature.

The movie is “amazing,” said Ashley, a 24-year old Filipino who lives in the United States. She said that although the acting is “mediocre,” the theme of the movie “can bring us light this Holy Week.”

Jose, a 27-year old Quezon City resident, said “it’s a great movie for Holy Week, but only for the religious, if I may add.”

“I feel the frustration of [Strobel],” he said. “I guess this movie can help you reconnect with God,” he said.

This Holy Week, as the Christian world commemorates the passion and death of Jesus Christ, let us reflect on what Cardinal Luis Antonio Tagle described as “the darkness that Jesus had to embrace.”

With the global health crisis due to the coronavirus pandemic we are not exempt from the “experiences of darkness.”

We are once again faced with despair and hopelessness as we are limited to stay at home even during the “holiest” season of the Catholic Church.

The lockdown, however, should not hinder us from celebrating the life, death, and resurrection of the Lord meaningfully in the confines of our homes.

As we all face the “darkness” together, let us remind ourselves that Jesus Himself faced darkness, despair, and suffering during His final days on earth, and through the experience He was able to bring us to light.

The Second Reading on Palm Sunday says: “Christ Jesus, though He was in the form of God, did not regard equality with God something to be grasped. Rather, He emptied Himself, taking the form of a slave, coming in human likeness; and found human in appearance, He humbled Himself, becoming obedient to the point of death, even death on a cross.”

Like Strobel who takes on a case to verify Christ’s resurrection, let us seek to discover and commemorate who Christ is and His true intentions for giving up his life.

Although Strobel’s intention at the beginning of the movie was to debunk the Christian belief of the resurrection, he later discovered something pure, realizing in the end that Jesus’ sacrifice is rooted in His undying love for us.

Commemorating Jesus’ love for humanity makes Holy Week meaningful even as we are unable to practice our Holy Week rituals in the buildings we call the church.

The Church, however, is us, the instruments of the Lord who cannot be stopped from celebrating the Holy Week.

Mary Matias is a fresh graduate of a Catholic school in Manila. She has since worked as a copywriter for various communications groups in the Philippine capital. Her book “Gabriel’s Garden” was named “Best Book of the Year” for the Youth and Children Category of the Cardinal Sin Catholic Book Awards in 2017.

Photos: Christmas in the city

‘For my Church and my people’: Exiled Filipino Protestant bishop bears cross in foreign land

Photos: Christmas in the city

Irish priest who designed churches in Mindanao dies at 97