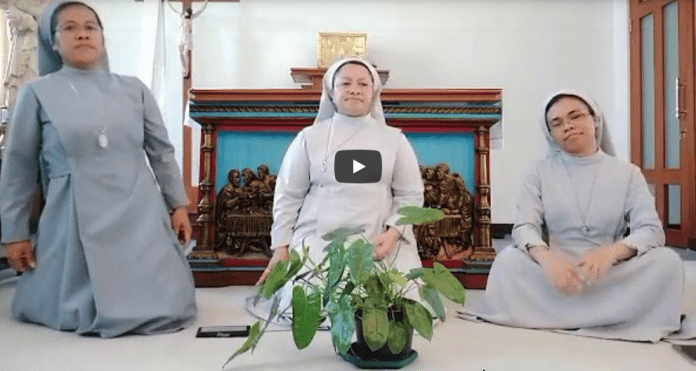 A video of three Indonesian Catholic nuns singing a popular song for Muslims on the celebration of Eid al-Fitr has gone viral on social media and drew praises from netizens.

“After fasting for one month, giving alms according to religious teachings, now we celebrate Eid al-Fitrhappily, let us celebrate Lebaran joyfully,” sang the nuns in Bahasa.

The missionary sisters belong to the Congregation of the Daughters of Our Lady of the Sacred Heart in Indonesia.

The video titled “The Beauty of Living with Tolerance” has already more than 23,000 views and has been shared on various social media accounts.

In a report, the Jakarta Post quoted social media users who lauded the Catholic nuns’ solidarity with the Muslim community during the celebration of Eid al-Fitr, the culmination of the Islamic holy month of Ramadan.

“Thank you for your respect, Sisters. How beautiful it is to live side by side and honor each other,” read Twitter post by @uki_ade3.

Another twitter user said the nuns’ video “makes me want to buy the sisters a bucket of opor ayam,” an Indonesian dish of braised chicken in coconut milk.

Governor Ganjar Pranowo of Central Java shared the video on his social media account with a caption, “[Your] voices are beautiful. Thank you.”

Netizens applauded the video, which some described as a “breather,” after incidents of religious intolerance in the country.

The renovation of the 92-year-old St. Joseph Catholic Church in Karimun, Riau Islands, has been stopped following protests from local groups.

The church, which was established in 1928, has acquired its permit to renovate in October 2019 but the work was delayed due to objections from local Muslim groups.

In North Sulawesi, authorities arrested three people for vandalizing a meeting hall for Muslims in a predominantly Christian housing complex in Tumaluntong village.

In May last year, at least 6,000 Hindus have been affected by the stop of the construction of a Hindu temple in Bekasi, West Java, due to oppositions.

President Joko Widodo has called on Indonesians to uphold “religious freedom,” saying that the country’s constitution “clearly protects the freedom for every citizen and their right to worship according to their beliefs.”

Hong Kong’s blurring border with China a sign of things to...